New kits now and on the way

Self-isolate and build kits instead

I'm slowing getting some kits together at last as my Carpal Tunnel Syndrome is easing up a bit but still there.

First to be released is the Victorian Railways QR in a 2 pack. It is a laser-cut card/timber kit with a heavy brass weight. $55.00.  It is relatively easy to build over an hour or so. Just supply bogies (Archbar available for $6.50 a pair), shunter steps and couplers.


The QR’s were some of the first bogie wagons on the VR system.  Construction started in 1890 and continued up until 1930.  This kit is based on the 3-door version which covers the number range 1-376 and 407.

Originally, they were equipped with spindly bar frames that and eventually changed over to the more familiar later series bar frames.  Others had plate frame bogies as well as the normal roller bearing that was available.  Being a go-anywhere wagon they could be seen over the entire VR system until their usefulness dwindled in later years but found a new lease of life as works trains conveying sleepers and gravel.  Towards the end of their life, they received the four-letter coding VOWA but not the many received the check digit.  With the 1980s upon the railways and wholesale scrapping of older wagons, the class met that same fate as many other older and obsolete wagons the Victorian Railways deemed of no use.

The next kit that will be available is the bogie LL/LF sheep wagon. Construction is very similar to the L wagon kits produced previously.  These will be available as a 2 pack and as various types of bogies were used I will leave it up to the modeller to chose their own. Couplers and shunter steps will be needed also.


LF construction started in 1928 and a total of 50 were built.  There are two compartments to each wagon allowing a different consignee to fill an end each.  The bogie version of the L wagon allowed it to utilised on freight around the state and 10 were fitted with BX fast passenger bogies and classed LP.  They were in use up to the mid-1980s and received the four-digit coding VSAY.

They spent virtually their entire life moving from country towns in block trains to Newmarket and Brooklyn processing plants. Between 1931-33, the entire fleet was converted over to auto couplers. Early in the 1970s, a live sheep deal with Saudi Arabia saw a large number of trains transhipping to Portland for overseas travel. By 1986 very few wagons were left in service as wholesale scrapping had already begun and with livestock trains finally ceasing in October 1986 the remaining units were scrapped. 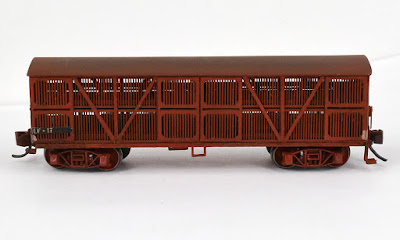 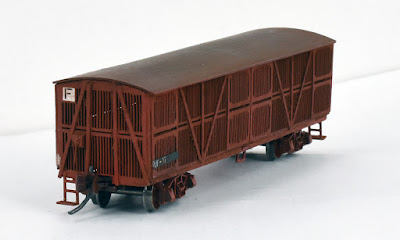 Remember to stay safe and self isolate. Why not build kits instead! Chris

Posted by Chris Pearce at 15:48 No comments:

Chris Pearce
Hi, I’m a fellow modeller like you but do small time manufacturing (cottage industry) during my limited spare time to help along the N Scale Australian fraternity. I started out in 1999 with just a couple of products and have steadily as time permits created mainly Victorian and some other states products for fellow N scalers. I invested in a laser cutter which allowed me to produce a large variety of carriages, wagons and structures that have graced my layout Wallan, which featured in AMRM’s December 2009 edition. Recently I have begun the process of creating 3D items in N scale. I also produce a number brass and composite kits for the Australian modeller, which can be viewed on my site at www.spiritdesign.com.au email chrispearce@spiritdesign.com.au